Hello again, and welcome to the NASCAR Racing Champions 1/64 diecast blog~ Today's post was a little bit tricky for me, as while I remember Stanley Smith, there isn't a lot of photos to work with, and not much information about him on the net~ So I'll have to go with what I've got to go by, and somehow make it all work~

If you're not familiar with Smith, that's probably because he wasn't around long enough for most people to remember him~ Known more for his bizarre crashes than anything else in the Cup series, Smith's career was sadly cut short due to such accidents~ I'm gonna talk a little about his early career, and a little about his time in the Ameritron Batteries Chevrolet in this post.. so sit back, turn off Mork and Mindy, and let's jump back in time to take a gander at Stanley Smith's NASCAR career~ :) 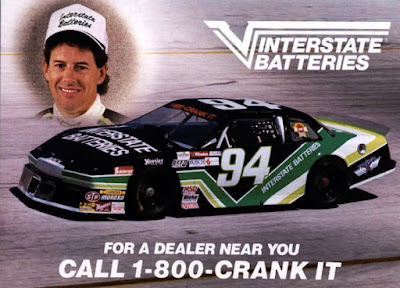 Stanley Smith was mostly known for his dirt-track racing, although he competed in 28 Cup raced from 1990-1993~ He ran his first career Cup race in the 1990 DieHard 500 @ Talladega, and qualified in 12th place in the Mark Smith owned #68 Interstate Batteries Pontiac, in what was the very first Interstate Batteries car in the history of NASCAR~

Remember how I said Smith was always involved in bizarre accidents?~ Well, while coming to the pits in his first race ever.. he slammed into the Tracy Leslie's #72 Detroit Gasket Oldsmobile (yes, this was a Cup race), injuring several crew members, while attempting to pit~ Both Leslie, and Smith refused to compete in the race any further, while they awaited to hear the condition of those who were involved~ Thankfully, everyone survived the incident~

Smith's car during the season before his Ameritron car~ 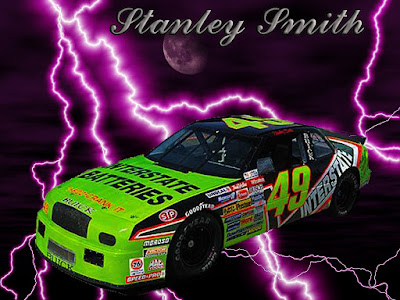 Smith's time in the #49 Ameritron Batteries car was horrible to say the least~ He finished the 1992 Daytona 500 in 22nd place, which was a season high~ He also finish 22nd in the Pepsi 400 later in the season~ He was involved in a pretty hard crash in the Winston 500 @ Talladega, but only suffered a few bruises~ He finished the race in 33rd place~

He started  a season high of 11th in the DieHard 500 @ Talladega, but never was a factor in the race, and finished in 27th place, three laps off the pace of race winner, Ernie Irvan~ He finished out the 1992 season with a career high of 14 races ran, while also achieving a career high in the final points standings, with a 35th place finish~

Stanley Smith in the pits in the #49 Ameritron car~ 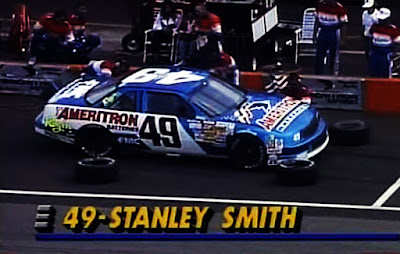 Smith then attempted to make several races during the 1993 Cup season, failing to qualify in his first six attempts, he finally got his chance during the 1993 DieHard 500 at Talladega~ He qualified 35th in his self-owned #49 Kresto Hand Cleaner Chevrolet~ On lap 68, Smith was involved in a massive crash, ending his Cup career due to a basilar skull fracture.. the same type of injury that killed Neil Bonnett and Dale Earnhardt~

The crash occurred on lap 69 when Smith clipped the  #32 car, driven by Jimmy Horton~ Horton then collected Ritchie Petty, Loy Allen, and Rick Mast, before his car launched over the wall, ending up completely outside the race track~ Smith hit the wall almost head-on and required medical attention~ Talladega, after the race installed a "catch fence" along the entire track for added safety, while NASCAR mandated "roof flaps" for all cars~

Smith never competed in another NASCAR Cup series race, however he did return to competition in the Gatorade All Pro Series in 2001, winning a series event in Kentucky at the age of 54~ He also ran 4 events in the BGN Series from 1991 and 1992~ At least he can say he led some laps in the Cup series though, having led 12 laps in the 1991 Pyroil 500 @ Phoenix~ Sadly, he crashed and finished in 36th place~ Thus goes the story of his Cup career~ 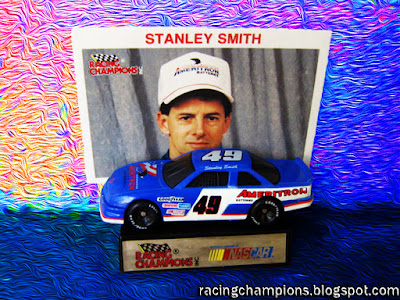 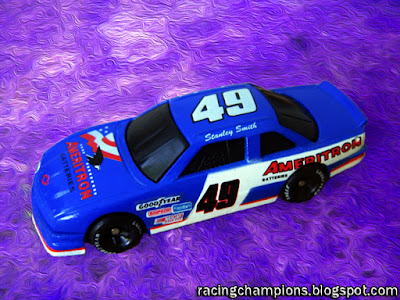 As you can see with this car, the paint is decent.. a little gap between the front bumper and the hood, but other than that, it's pretty nice~ There is an American flag on the hood, with a little eagle flying around as well~ Ameritron batteries are still being produced to this day in Ohio~ The red, white, and blue on the car really make me want a hot dog, and an ice cold root beer too~ :)

I wish Stanley could have had better luck in NASCAR, but they all can't be winners~ He still competes in lower tier racing, and won as recently as 2010, I believe~ I give this car a B+ on the Racing Champions quality scale~ Thank you all for visiting the blog!~ Included below is a video clip of the crash from Talladega, along with some random NASCAR clips~ Please remember to share this post on Twitter, Facebook, or any other social media site~ :)

Buddy Baker, Larry Mac, and Eli Gold having fun in the booth~

Posted by Buttermilkjug at Saturday, June 27, 2015